Mystery initials on a porch at St Peter’s Church, Heysham

On the latest of my frequent trips to Heysham, I discovered something – or several somethings – I’d never seen before.

I’d driven there in the hope of catching an interesting sunset, as I’d judged that the sun might show itself through a low-slung gap in the clouds and illuminate the cloud-banks from beneath. I arrived with time to spare and so decided to take a closer look at the ancient Church, specifically because I’d heard there was a Green Man carving in the main porch. This tiny, Saxon-built porch is not enclosed but does have a metal bar gate which, of course, is locked when the church is unattended, so examining the individual stones for possible faces was not easy. I may have spotted it – or I may have been wrong. Another time, when the Church is open, I’ll look more closely.

Sunset was still several minutes away, so I wandered around the church, looking afresh at the detail of its age-work stones. When I came to the other, even smaller porch, on the opposite side of the building, I saw that one of the stones used to build it had engraved upon it some initials and a date. Then I saw another one. And two more. All on one small wall. Intrigued, I moved to the other side of the porch and, yes, that wall held several similar inscriptions. One more was set at the side of the door, whilst another held pride of place above the lintel. All the dates were different, all the initials likewise apart from RL, who appeared twice. I say ‘who’ because clearly these were memorials to a number of people. But why? And why the variety of dates? 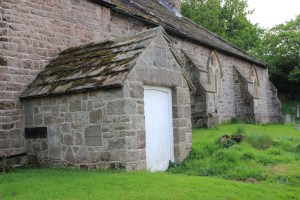 The inscription over the door reminded me of those often seen on old houses, showing the date the house was built and the initials of its builder or builders.  However, this was one of the stones carrying the initials RL, which also appeared on the stone beside the door – but with an earlier year.  So, then, RL did not build the porch.

But no, I have checked the list of Rectors of those times, and they do not match.  In any case, two bear the same date, and two carry two sets of initials.  At that point, I ran out of ideas.  It is truly a mystery.  Suggestions welcome, if you have any!  I look forward to this mystery being solved (because it surely will be, eventually…).

Sunset was approaching.  I walked up the pathway beside the church and emerged on the headland justin time to see that the sun had revealed itself as I’d hoped, for the first time that evening, through the only available gap in the clouds.  Timing is everything… less than two minutes later, it sank from view… 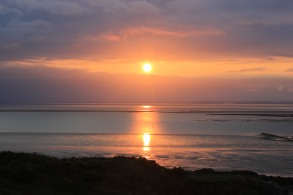 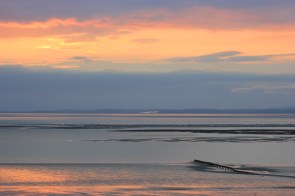 7 Responses to Mystery initials on a porch at St Peter’s Church, Heysham