Posted on September 19, 2014 by LancashireFolk 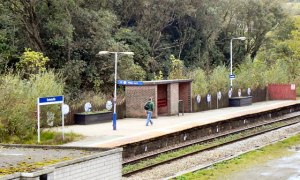 In the 1940s, the railway employee in charge of Entwistle Halt, one Mr Ackroyd, repeatedly saw a small boy playing by himself in the fields near the railway line. He never appeared during winter months, but during the summer he was there almost every weekend and Ackroyd never questioned his presence. However, he did sometimes wonder about the boy’s home-life, as he appeared somewhat thin and pale-faced. Also, he often saw the boy standing at the crossing-gates, looking very sad. It seemed that for some reason he was waiting for a particular train to pass before going back to his home, because when the 5.29 train appeared, he would disappear.

In 1945, a terrible accident happened and a local farmer was killed at the crossing, after falling on the line and being unable to get out of the way of the approaching train. Only then did Ackroyd learn that, many years before, a little boy had been killed in a similar manner a quarter of a century before. In the late afternoons, he would wait at the crossing for his father’s horse and cart to come home. One day, no-one ever knew why, the lad spotted his father and ran over the crossing, straight into the path of the 5.29.

The victim of this latest accident? The boy’s younger brother.

Image © Copyright David Dixon and licensed for reuse under this Creative Commons Licence.