Posted on November 19, 2015 by LancashireFolk 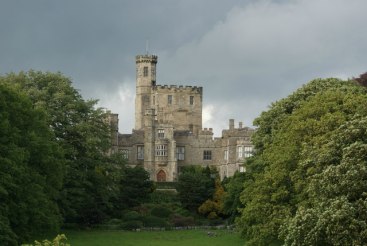 The first documentary evidence of Hornby Castle is in 1226, when it was already well-established. The castle we see today is a modern Gothic-inspired building, dating from 1847. But that in no way spoils the story…

Edward Stanley of Hornby Castle was born around 1460. He was knighted by Richard III in 1482, then after great valour at the Battle of Flodden Field he was honoured by Henry VIII with the Order of The Garter. As the Stanley’s family emblem was the Eagle, he adopted the title Lord Monteagle. As a symbol of his gratitude for the victory at the Battle of Flodden he built a remarkable eight-sided tower at St Margaret’s Church in the village.

However, local legend would have us believe that the octagonal tower came into being for a completely different reason. The legend paints Lord Monteagle as a rather wicked character, a materialist who did not believe in God. Neither did he believe in heaven; he said that ‘the soul of a man was like the winding-up of a watch; when the spring was run down, the man died, and the soul was extinct.’ He was believed to practice unholy rites late at night in the turret of Hornby Castle and the local people would cross themselves when they saw the light in the turret window. It was also rumoured that he had only married his wife for her money and when her brother died, it was said that Monteagle must have murdered him.

One night Lord Monteagle summoned the parson from Slaidburn, intending to have a good argument about theology. The two men argued for hours until finally the parson could stand it no longer. He stood up and told Lord Monteagle that only fear was preventing him from believing in God – fear of dying and going to Heaven and having to face his brother-in-law Harrington, whom he had murdered. Lord Monteagle was silent, because the parson was right; he was scared. And then the room became very still, and a white mist formed and moved around the place… it was Harrington’s ghost!

From the moment he saw Harrington’s ghost, Lord Monteagle was a changed man. And it was then that he built Hornby Chapel, as a demonstration of his new belief. He also began to build a chancel and planned to be buried there, but he died before it could be consecrated. He was buried temporarily in the Priory churchyard, with a plan to bury him in his own church eventually. But then Henry VIII dissolved the monasteries, including Hornby Priory and Lord Monteagle’s remains never were removed. It’s believed they lie there still, in the old Priory churchyard which is now no more than a field, near the River Lune.

© Copyright Stephen Armstrong and licensed for reuse under this Creative Commons Licence.