Mysterious Falls From the Sky…

Posted on July 6, 2016 by LancashireFolk 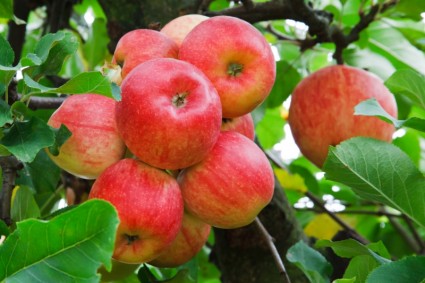 In Accrington, in 1984, over three hundred apples rained from the sky into a garden in East Crescent. The couple who lived there were woken by a horrendous noise – a noise so loud and protracted they thought it must be a freak hailstorm. They were mystified to discover that the noise was made not by enormous hailstones, but by dozens of apples.

It has been suggested that the apples may have fallen from a plane – but the fact is that apples continued to fall for over an hour in the very localised area of this one back garden, so a passing airplane is very unlikely to be the answer. Anything falling from a moving plane over time would be spread across a much broader area. It has also been suggested that a tornado may have lifted the fruit and just as suddenly dropped it again. Tornadoes in the UK are more common than one might think – between ten and fifty are reported every year – but they are never very strong and could not transport anything very far. And surely a localised tornado would have been noticed elsewhere than in this one back garden in East Crescent?

Three years previously, in Reddish, St Elizabeth’s Churchyard was the scene of a similarly remarkable event when coins of all denominations fell from a clear sky. Sometimes a single coin would fall, sometimes a number of them, of varying denominations and over a long period of time.

The first discovery was made by a young girl who said she actually saw the coin fall through the air in front of her, but other children heard coins tinkling as they hit areas of paved ground. The local sweet shop owner, surprised by the steady stream of children visiting his shop, went to speak with the Rector of the church, concerned that perhaps a charity box in the church has been raided, but it was found to be untouched. The Rector himself gathered a number of coins in the churchyard and, noticing that some had embedded themselves in the ground, he experimented and found that he could not make the coins fall in that way, no matter how hard he threw them. He surmised that they must have fallen from a great height. But from where?

All over the world there have been tales of strange ‘falls from the sky’. Two of the most commonly mentioned falling items are masses of ice and dozens of frogs, both of which can be explained – after a fashion. Ice is said to have built up on airplanes and been dislodged by a change in the weather, and it is suggested that the frogs and similar small creatures have been lifted by tornadoes or hurricanes and transported some distance before being dropped again as the whirling wind subsides. Sometimes the ‘falls’ are of dozens of fish, and the idea of a hurricane snatching up a pond full of water and all its occupants seems acceptable.

However, it really isn’t so easy to explain away hundreds of apples and dozens of coins. Of all the ‘strange falls from the sky’, those in East Crescent and St Elizabeth’s Churchyard are two of the oddest I have ever come across.