Posted on September 21, 2016 by LancashireFolk 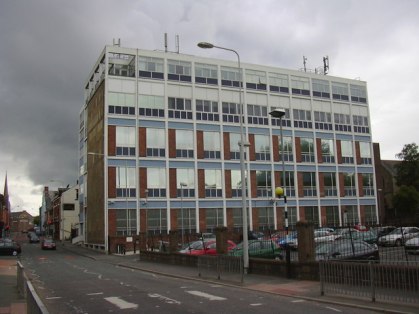 Blackburn Telephone Exchange is a relatively modern building but it has long been regarded as haunted; strange noises have disturbed night-shift workers and the sounds of piano-playing and heavy footfalls have been heard. Piano-playing? How could this possibly be?

The site was once occupied by the Grand Theatre, built in 1880 and holding an audience of three thousand. In the early 1930s, management of the Theatre was taken over by William Murray, who boasted involvement in launching the career of one Charlie Chaplin. After William died his son Roy became manager, but like so many theatres the Grand had to close in 1956, the advent of cinema and TV tolling its death knell.

Even before the building was adapted for use as a Telephone Exchange, there were rumours that the building was haunted. Piano-playing would sometimes be heard and stage curtains drew across the stage on their own. Demolishing the building and putting a telephone exchange in its place did nothing to dispel the rumours. Three young men working the night-shift experienced the ghost for themselves. Heavy footsteps were heard upstairs and then they heard the lift in operation, apparently coming up to their floor from the ground floor. The doors opened but there was no-one inside.

The lift was also the scene of a more visible ghost when a cleaner who had worked at the exchange for over twenty years saw a rather ill-looking lady go into it. It was full daylight when the cleaner saw the blonde woman dash into the lift as if she was in a hurry to leave. Yet, even though the doors closed, the lift did not move. Concerned about the woman, Brenda opened the doors again – and the lift was empty. On another occasion Brenda’s colleague was washing her hands in the ladies washroom on the fourth floor when she felt someone brush against her – but no-one else was in the room. The same ladies washroom was the scene of another event when two female night-shift workers visited the room and heard the taps gushing water, when they were both in the cubicles.

The source of these odd happenings is thought to be the ghost of William Murray, the one-time owner of the theatre which once occupied the plot. However, given the above experiences – the woman in the lift, the taps in the ladies’ room – that seems unlikely. Or, just possibly, there is more than one ghost at the Exchange…

Image © Copyright robert wade and licensed for reuse under this Creative Commons Licence.

3 Responses to A Ghostly Piano at Blackburn Telephone Exchange