Bramall Hall – Moved by the Fairies! 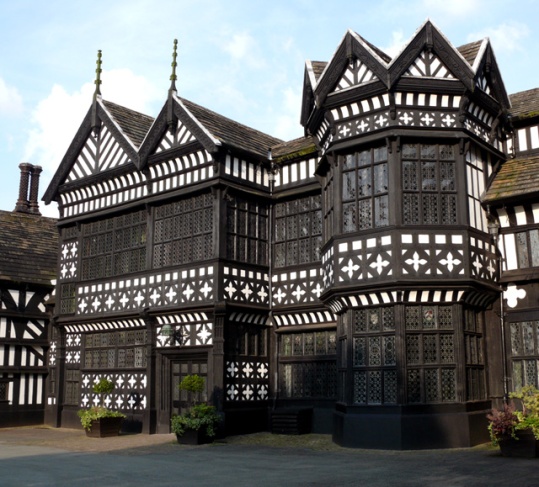 Bramall Hall, on Hall Road in Bramhall, is several centuries old. Parts of the building date from the late 1590s. A short distance from the hall is Crow Holt Wood and this, so the legend says, is where the builders originally intended the hall to stand. However, night after night the foundations were moved by fairies until the builders had no alternative but to build the hall where it now stands. It is surprising to find this folk-legend attached to Bramall Hall; such stories usually feature churches, not residential buildings. It is also odd to see it attached to a relatively recent building when such legends usually date from the 11th or 12th century. The prosaic truth is that Crow Holt Wood was the site of an earlier hall – ditches have been found which indicate an ancient moat, which must have encircled a building.

The legend about fairies may be a recent invention, but what of the tradition which says that Bramall Hall is visited each New Year’s Eve by the Red Rider; a ghost clad in a red cape, on horseback? He is said to be the ghost of a real horseman who visited the hall in the 1630s. He was given food and shelter but next morning he had disappeared, leaving the owner, William Davenport, dead on the floor.

An old ballad tells of another ghost who haunts one of the bedrooms here; Alice, or the Maid of Bramall Hall. She was eagerly awaiting the return of her lover from Spain, so was naturally horrified when his horse arrived at the hall without a rider. Her lover’s body was soon discovered in Macclesfield Forest, murdered by highwaymen, and when his body was brought to the hall Alice broke down in grief. She mourned him until she died and still haunts the room where she eventually gave up her life.

An alternative story about Bramall Hall’s female ghost says she is Dame Dorothy Davenport, wife of the above-mentioned William, the original builder of the hall. Her bedroom is so badly haunted that it has earned the sobriquet of The Ghost Room. Visitors to this room sometimes hear rustling skirts or feel a hand on their shoulder – at least one visitor has even heard a voice saying ‘Hello’. A shadowy woman has also been seen in the Plaster Room, passing through the wall into the Withdrawing Room next door.

Image © Copyright Bob Abell and licensed for reuse under this Creative Commons Licence.

10 Responses to Bramall Hall – Moved by the Fairies!